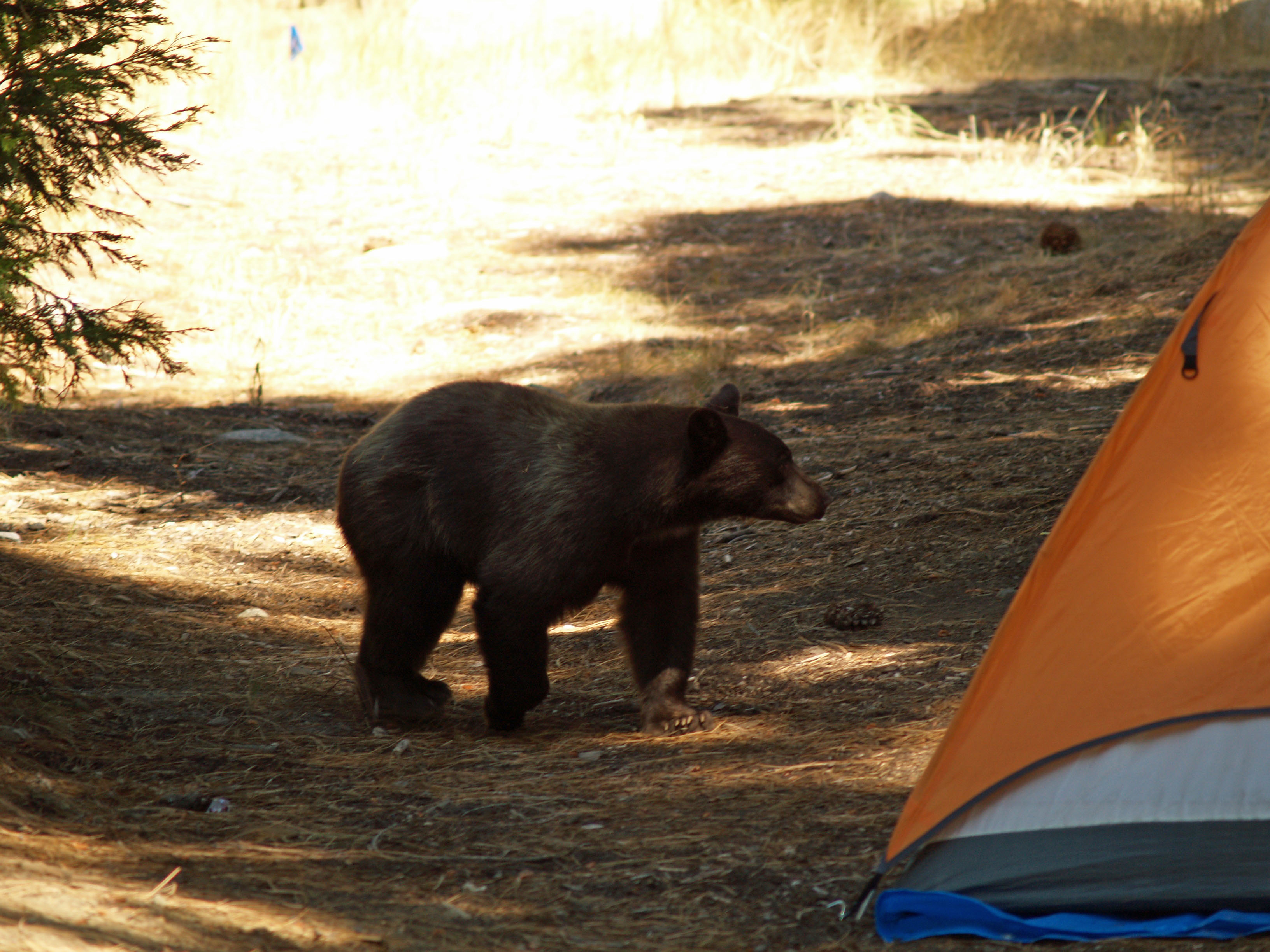 A black bear’s number one goal is to find food and over the years they have learned that an easy place to find food is in campgrounds.

Sure, you can probably take lots of pictures and have fun watching them as they raid your or your neighbors campsite and in most cases they will run away if you make enough noise. But if there was an odor of food in your site and that bear is hungry, it may not scare away and for sure if it runs, it will be back.

That is where it can be dangerous as the bear may attack you or your loved ones by mistake while looking for food.

In Lake Tahoe, a campers have mauled by a black bear. The bear was raiding campsites and tore into the tent while the camper was in it. This is becoming more common since the continued California drought 2015

Most likely bear hunting people, but think tents as a source of food. As a result campers can either be seen as a threat to the bear or can be injured by a bear while it tries to get into a tent. (Bear claws are razor sharp). They can smell food and makeup products.

An example from Lake County Colorado, a black bear was raiding a bow-hunters gathering campsite. After going through a food cooler and enjoying a feast of eggs, the bear tore into a teenage boy’s tent and mauled him.

Tents are not the only place you can be mauled by  black bears. They will break into tent campers, RVs, cars, and cabins.

One mistake campers make while renting cabins in bear country, is to leave windows and screen doors open at night and while cooking.  Bears do not care that you are there or not. The animal(s) wants your food and if your in the way, you are a candidate for an accidental or defensive bear attack.

More examples have happened in the Sierra Mountains to make it even more dangerous for visitors to bear country, including the Lake Tahoe and Yosemite National Park areas.

When the winter snow and rain continued into June of 2011 and with the opposite with 2014 continued California drought, bear food becomes hard for them to find.  This causes bears to move to lower altitudes to find food and makes them more likely to wander into your campsite.

Bear populations are growing to the point that officials are considering allowing previously banned bear hunting to reduce populations.

So with all this to consider, here are a few important tips to prepare for the highly possible bear encounter this year.

Have Bear Spray Pepper with you and ready to use. It could help stop or even prevent a bear attack.

Keep food or anything that smells, including makeup, toothpaste, soda, iced tea, and bag snacks out of your tent, or camper. Place these items into a bear proof container away from where you will be. And remember food scent remains even if the food is removed.  It is better not to have it in a sleeping area at any time.

Keep Cabin Doors and Windows closed. If a Black Bear gets in try to find a safe way to get out. Make loud noise, but do not corner a bear. Open exits and give the bear a way out. A trapped bear is a dangerous bear. If needed, call 911 for help.

Garbage is a food source to a bear. Throw that garbage bag tied to the tree, or camper into a bear proof garbage can.

If you come upon a black bear in the open, don’t run. Stand your ground, make noise but give the bear a way out and never get between a bear and cubs.

These tips will help you keep your campsite safer from the black bear food seekers. There are other Black Bear experiences and tips to read about here at our For Security Sake Blog.

Be safe out there.