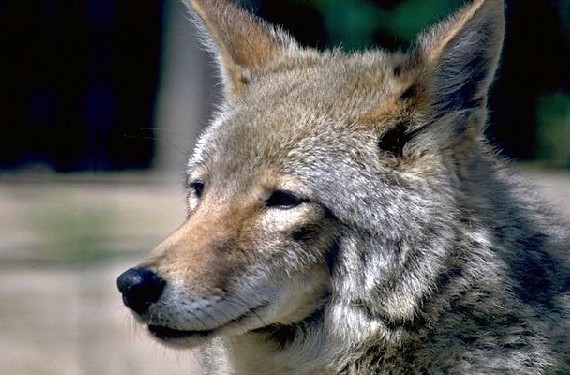 We live in The San Joaquin Valley, California and it is not uncommon to see Jack Rabbits, and Raccoons on the farm land around us. Is not unusual to hear Coyote yelps and screams if you are fishing around area lakes and Rivers, but it is, or I should say was, unusual to see these animals walking down city streets, attacking people in their carports, and chasing small animals inside your house.

But that is just what has been happening California:

Other than sighting many jackrabbits in home gardens, other specific incidents have been worthy enough to make the newspaper and television news.

In San Diego County, a Coyote was sighted chasing a cat down the middle of a gated community street.

In East Lake, a resident reported hearing coyotes hysterics near by as a pack captured their dinner.

A Rancho Penisquitas resident, reported that here neighbor’s dog was taken from a fenced yard, by a possible coyote, and that they are now afraid to leave their dog outside.

A Spring Valley resident, reported that a coyote chased a dog through a dogie door right into the house surprising the owner who was then in a fight to save her pet.

In Sacramento, a young woman was attacked by raccoon, twice, while walking from her car to her front door. She is now undergoing rabies treatment.

In densely populated area of Stockton, a set of three raccoon cubs were found living in a home owner’s back yard tree.

And in Glendale, an entire pack of coyotes have taken up residence in an upscale neighborhood home that burned last November.

These are just some of the incidents reported in our area. We need to change the way we treat our pets and garbage and we have another use for animal repellent pepper spray.

First understand that animals that normally live in the wild, are loosing their homes and food sources, as we spread out our cities to accommodate the growing population. So they move down from the hills looking for food and nesting areas.

Help keep them away from your home by:

If possible, watch your small pets while they are outside or place them in pens.

Don’t leave out pet food where wild animals will find an easy source of food.

If you have yard or a home garden, consider fencing it in and research methods to repel animals from it. There are chemical, electrical, and electronic animal repellents on the market.

If you see a wild animal, keep your distance. There are recent cases of rabies transmission from a paw scratch.

Keep animal repellent nearby. You never know when it could be needed to save your pet, or child from an animal attack.

But above all, be safe out there!