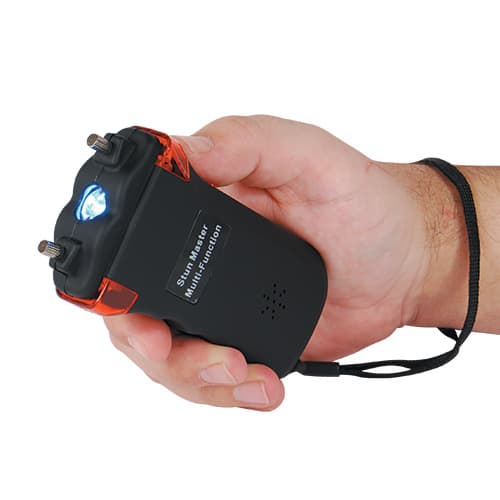 Stun Guns are one of the best self defense products currently on the market. They not only work well if you have to use them physically, but they have a fear factor by just sparking them defensively.

In interviews with suspects known to attack for the purpose of rape or theft, some have indicated they had, or would walk away if they approached someone with an activated stun gun.

Frank Miles, a Juggler from San Fransisco California, walked out on a Los Angeles stage while talking to the audience about the worlds most dangerous and possibly deadly stunt he was about to do. Then he juggled three activated 500,000 volt Stun Guns that he had mounted on sticks. While he juggled, he made comments about how dangerous the stunt was like; “it is a scientific fact that if I grab two of these on the wrong end at the same time that would suck”. To add to the effect, Frank stepped into a trough filled with water.

The Judges and audience had terified looks on their faces and believed what Frank said. The Judges thought he would be dead if he droped the sparking objects in the water. They were so impressed that they sent him onto the next round.

Frank knew exactly what he was doing and in my opinion was in no deadly or lasting phyiscal danger. Although it would hurt and possibly knock him off his feet if he grabbed the wrong end, the voltage of 500,000 volts was not dangerous without high amperage. These product’s amperage is actually very low, so it will not cause any lasting harm to the person who receives a shock from it.

What is really important is that the audience thought he was in real danger of great bodily harm or death. It is this belief that causes the fear factor of the product to work so well for self defense.

When I demonstrate a stun gun product, I always go through the functions of the unit and how effective they can be.

A one second contact to an attacker with the device will repel, startle and trigger muscle contraction. One to two seconds will cause muscle spasms, a dazed condition and possibly a loss of balance. Three or more seconds will cause loss of equilibrium and muscle control, mental bewilderment and severe disorientation. The attacker will be unable to recover for several minutes and effects may well last for up to fifteen minutes.

After this explanation, I will hold the model I am showing and explain the contact ends, and spark test the unit. Everyone listening or watching the test will jump and move away.

The same thing happens when an attacker sees and hears the spark of a stun gun. He/she knows that if they don’t back off it is going to be like Frank said above.

So keep your stun gun with you and at ready. If you are threatened, Show and spark it. Your assailant will think twice and it may be all the self defense you need to get away and get help.