There is violence news in the headlines every day now. One that stands out, is about a young woman newly widowed and facing the challenge of having to take care of her baby as a single mother.

A short time after her husband’s funeral, the woman received a knock at her door. She was confronted with a young man that tried to talk his way into her home. She refused and he left.

Later the man came back again with a friend and started to force their way into the woman’s home. She retreated to a bedroom where she blockaded the door, obtained two weapons- one of which was a shotgun-, and called law enforcement for help.

The dispatch tape of this call has been released and you can hear the woman ask the dispatcher if she could shoot the men if they entered her bedroom. The dispatcher told her that she could not give permission, but that she needed to do what ever was needed to protect her baby.

The men reportedly forcibly entered the bedroom with a knife and one of them was killed when the women used the shotgun. The second suspect ran away.

The way this was reported shows that the woman thought about her family’s safety first and she was able to protect her baby and herself successfully. If she didn’t have her weapons, or if she hadn’t  known how to use them, this situation would have had a very different ending.

Are you ready for a similar thing if it were to happen to you? If you prefer not to use, or don’t have a firearm, do you have a non-lethal Taser, Pepper Spray, or a Stun gun? The time to prepare is now. The above type of incident can happen to anyone anywhere.

Non-Lethal weapons can be a better choice than a lethal firearm, because you won’t hesitate to use them. Although the experience is tramatic to begin with, adding the burden that you took a life stays with you forever.  A non- lethal product will cause pain, or temporally incapacitate an attacker while you get safely away.

Personally, I prefer to carry a  Taser, or Stun Gun and Pepper Spray wherever my family goes. Lets compare each of these non lethal weapons. 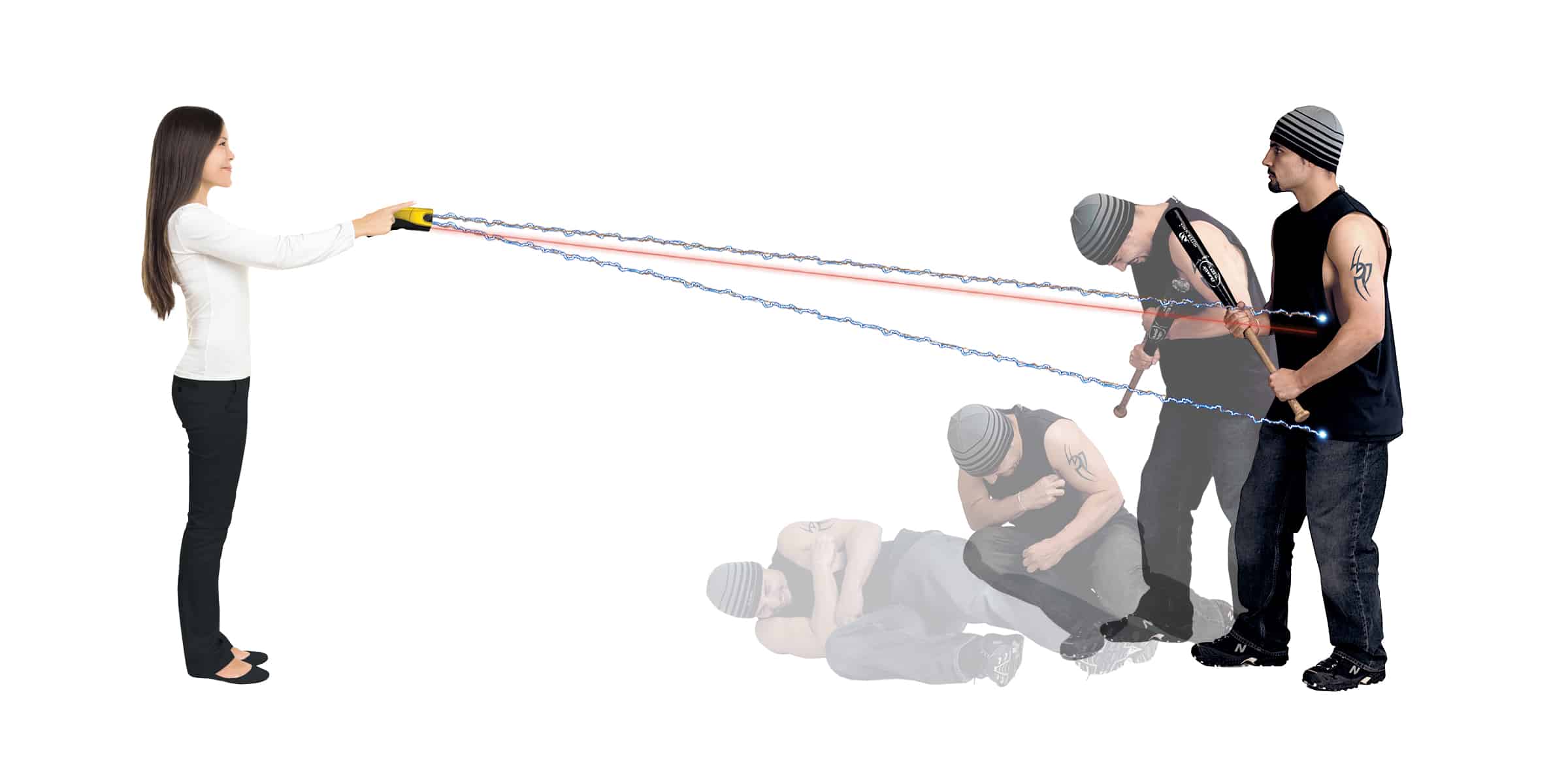 Taser, sometimes misspelled Tazer, products will help protect you and your family. Specifically designed for the general public, the Taser C2, or the new Taser Bolt work similar to and can work as a stun gun, but has darts that shoot out to the attacker.  Wires from the darts connected to the Taser body allow a 30 second burst of electrical pulses that shock the recipient of the darts with 50,000 volts.  The Taser is designed for you to drop the Taser while the attacker is unable to control his muscles for 30 seconds, giving you time to get away and get help.  You can get more information and watch our Taser Videos by clicking on this link. If you get the message only secure content is shown, you will have to click on show all content to see the videos.

Pepper Spray is inexpensive, easy to carry in a car, pocket, or purse, and is effective. Sprayed in the face of an attacker pepper spray will cause a burning sensation and cause the attacker to be confused and unable to focus.

A Stun Gun is inexpensive, easy to carry in a car, belt holster, pocket, or purse. Holding an activated stun gun against an attacker can cause pain, muscle dysfunction, and disorientation.

You can learn more and purchase these products at https://www.ForSecuritySake.com

Be ready! Protect your family and yourself.