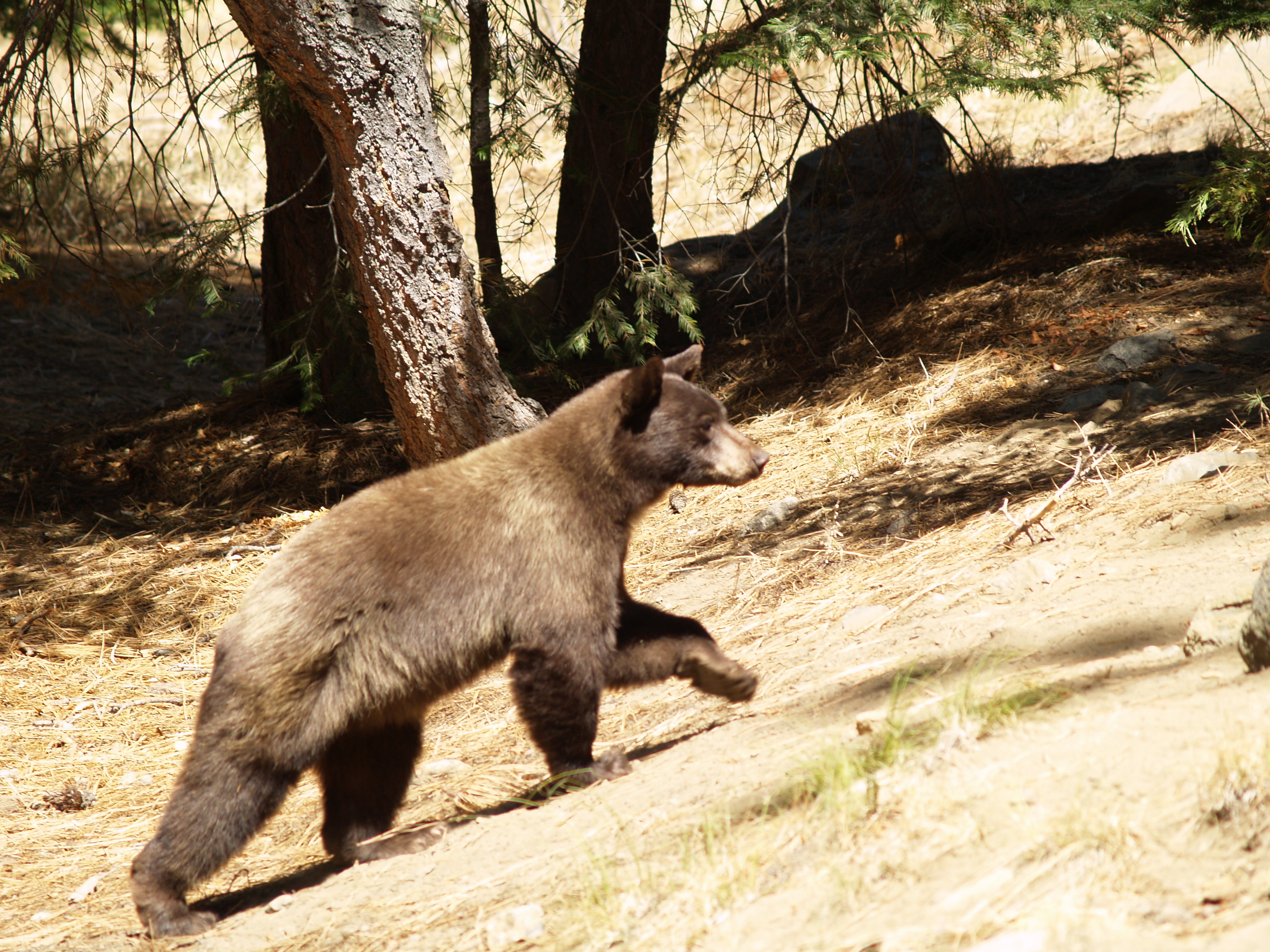 Our Back Packing party was four adults and three teenagers. We learned much about Black Bears while camping in the back country Hetch Hetchy reservoir area of Yosemite National Park.

After six hours of hiking up the mountain trail above the reservoir, we reached an area with supplied fire rings and wire cable lines strung between trees. We decided to camp there for our trip.

Camping near us were four park rangers studying the design of some new bear proof containers.

We knew we were in Black Bear country and we were prepared with our Bear Pepper Spray Repellant, but we learned a lot more from these rangers and our trip. The area we were staying in is the drop off point officials take Black Bears that were aggressive and a nuisance in the Yosemite National Park Valley.

The rangers gave us some facts about Black Bears in the Yosemite National Park Area:

Always keep food, makeup, and any sugar, or sweets out of your tent and parked car. Black Bears have torn into tents or cars when a smell of food or sweets is present. Instead always place your food in a bear proof container or hang it in line strung across two trees out of reach of bears.

Never try to take food away from a Black Bear once he has it. They will protect their food.

Black Bears will return to a point they have found food in the past.

Never run from a Black Bear. Black Bears will normally stop a charge when you stand your ground and look as large as you can. If you run, they see this as a sign of weakness and may chase you down.

Black Bears normally scare away with banging pots and pans or thrown rocks. Bear attacks are rare as long as you use common sense.

Never get between a Black Bear and her Cub(s).

Bears are smart; they will learn different techniques to get at your food. We learned this as we had Black Bears in camp every day and night we spent there.

Here are two of our experiences with these bears:

*We did not use our bear spray here because we wanted to see what the bear would do and we were never in any danger from the bear.

We followed instructions and hung our food on a supplied line stretching between two trees. Some of us were in camp when in bright daylight, an adult Black Bear spotted our food.

This bear climbed one tree where the food line was secured and tried several times to reach out and snag the food bag. The bag was out of reach and we thought the bear had given up.

The bear then climbed the other tree where the line was stretched and tried again without success. We were sure at this point the bear would give up, but then the bear stood there under the food pacing back and forth, ignoring us. Then we realized just how smart and powerful these bears are.

After a few minutes of pacing, the bear went to a young pine tree and began to push it from the trunk toward the food line. To our amazement, the bear was able to push the tree toward the food and climbed the tree, while keeping it bent toward the food bag. As the bear got close enough to reach the bag, it used one front paw to swipe the bag in the middle. And with that the Ripstop Nylon bag was in two pieces, the bottom full of food now on the ground.

The Black Bear ran off with the food bag and did not spill a single piece. But we had one more thing to be amazed about with this bear.

Knowing that it is bad news to mess with a bear with food, and armed with our Bear Pepper Spray, we waited an hour and followed the bear tracks. We walked only a couple hundred yards when we found the leftovers, and none of it was uneaten food.

There on the ground was the empty Ripstop Nylon bag and twenty beef jerky plastic wrappers, all in a neat little pile. We will have a good time with this true story for many years to come.

Simply put, Bear Pepper Spray is a good thing to have when those unexpected bear moments arise. You may never need it, but when you do need it, not having it could be tragic.

One day of our camp out, our three teenagers just happened to get to close to two bear cubs that had wandered into camp. Momma bear was not yet in sight and while paying attention to these cubs, momma bear charged the boys.

The boys did not stand their ground, but one of our adults with Bear Pepper Spray Repellent and another with banging pots and pans did. This Black Bear family did not return to our camp during our stay.

Keep watch on our blog and you will see some more stories from our bear encounters.