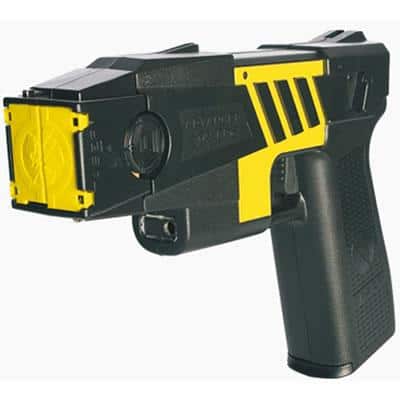 June 2nd, 2010, a Manteca Bulletin Newspaper article by ERIKA HAFER describes how a Taser helped to save a life and also protect the officers using it from harm.

It was a life and death foot pursuit Tuesday morning on the Highway 120 Bypass as Manteca Police Sergeant Julie Renfro risked her life dashing 150 yards to prevent a despondent 47-year- old man from ending his life in freeway traffic.

While the Manteca man stepped into traffic three times Renfro nearly missed being hit by a westbound semi-truck in her attempt to restrain the distraught individual. Officers Greg Beall and Mike Keener, were also attempting to detain the man as officer John Machado used his unit to run road blocks in an effort to slow freeway traffic.

As the man resisted arrest Beall and Keener were forced to tase him in their effort to keep him out of the traffic lanes and to take him into custody. Manteca officers transported the man to San Joaquin Mental Health in Stockton to be evaluated. No charges were filed against him. However a report of the incident was forwarded to San Joaquin County District Attorney’s Office. He could face charges of resisting arrest.

Officers had been called to the Union Road overpass half an hour earlier when motorists feared for the man’s safety on top of the bridge, saying he was acting erratically.